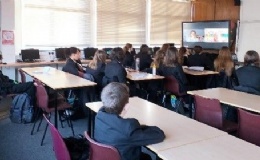 Hartshill Academy Library’s Book Club commemorated Holocaust Memorial Day today with a live webinar with author Liz Kessler. Liz was speaking about her new book, When the World Was Ours, set during the Holocaust and inspired by real events experienced by her own family members at this time. The story has a triple-narrative, split between three young friends – Elsa and Leo, both Jewish, and Max, whose father is a rising star in the Nazi party.

The book is already a firm favourite with the library Book Club, who are reading it as one of the shortlisted titles for the Warwickshire School Book Awards (for which we hope to be attending the ceremony in March). It was a fantastic opportunity to gain some insight into the writing of it, as well as some more understanding of the history behind it.

Liz spoke emotionally of this background to her story, in particular a meeting with an English couple on holiday in Austria in the mid-1930s that eventually saved the life of her father and grandparents.

As a young boy on a day out in Vienna, Liz’s father had knelt on a bench and got his muddy shoes too close to a lady’s dress. The resulting apology from his father sparked a conversation with the visiting couple, the Joneses, after which followed a meal together and later a thank you letter sent from England.

This friendship ultimately saved the Kessler’s lives when Austria was annexed by the Germans and Jews were in grave danger. The author’s grandfather wrote to the Joneses and received an offer of help, which ended in them sponsoring the family to travel to safety in England. Without this chance meeting, the family would almost certainly have perished, as indeed did the author’s great aunt who is listed in the ‘Book of Names’ at Auschwitz concentration camp (a memorial to all known victims of the Holocaust).

As well as hearing Liz speak, the students also had the opportunity to submit queries and responses via the organiser, with Anna from Y9 being praised for her ‘amazing question’ for asking why Liz Kessler felt it was important to include Max’s perspective in her story.

It was a privilege to be able to attend this online event, and the students will have plenty to discuss in our next Book Club meeting (Tuesdays after school for anyone thinking of joining).

Our thanks go to Authors Aloud UK for hosting the event, and to H and H Spalding books for offering discounted copies of the book for the students to purchase, that will come with a bookplate signed by the author. I can offer these to students outside of Book Club, so please do get in touch if you would like to order one for your child.